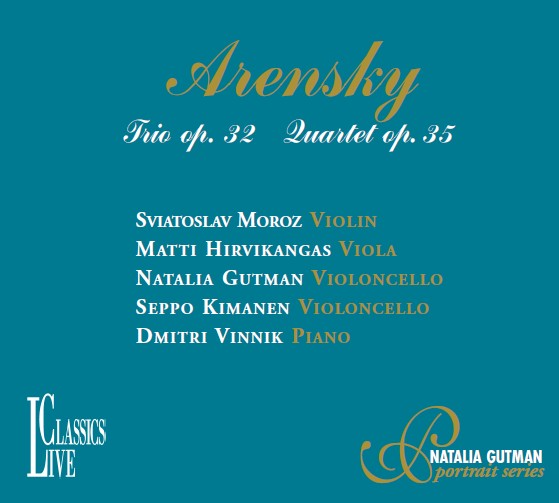 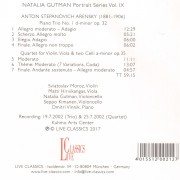 SVIATOSLAV MOROZ star ted playing the violin at the age of five. He became a student of Oleg Kagan at the Moscow Conservatory and studied later with Gerard Poulet at the Paris Conservatory. Acclaimed as an artist with remarkable individuality, Moroz, whose reper toire ranges from Bach to Schnittke, is par ticularly esteemed for his powerful interpretations of the romantic and modern reper toire. Appearing as a soloist with many famous orchestras, including the Berlin Philharmonic, Moroz has also performed chamber music with world-known musicians, as Sviatoslav Richter, Mstislav Rostropovich, Oleg Kagan, Natalia Gutman, Kim Kashkashian, Victor Tretyakov, and Boris Berezovsky.

MATTI HIRVIKANGAS studied viola at the Sibelius Academy and Nordwestdeutsche Musikakademie with BrunoGiuranna and Tibor Varga. Afterwards he has served as Principal Viola with at the No rwegian Opera Orchestra, the Finnish Radio Symphony Orchestra and played with the Kammerorchester Tibor Varga as well as the Finnish National Opera. Hirvikangas has earned a reputation as an eminent chamber musician and he has lent his support for many years to the Kuhmo Chamber Music Festival. He was as a member of the Jean Sibelius Quartet.

There is no doubt that the cellist NATALIA GUTMAN is one of the most prominent musicians of our time. She started her career in 1959 with a Gold Medal at the World Youth Festival in Vienna followed by the Third Prize at the Tchaikovsky Competition in 1962, when she began to study with Mstislav Rostropovich at the Moscow Conservatory. With respect to her musical personality, her close friendship with Sviatoslav Richter was most influential. In 1967, the First Prize at the ARD Competition constituted the cornerstone of her international career.
She played under prominent conductors as Abbado, Temirkanov, Mehta, Celibidache, and Maazel. Among her partners in chamber music are Yuri Bashmet, Isaac Stern, Mar tha Argerich, Elisso Virsaladze, Evgeny Kissin and, not to forget, Sviatoslav Richter and her husband Oleg Kagan.

SEPPO KIMANEN studied at the Prague Conservatory, later at the Paris Conservatory and completed his cellostudies at Detmold Academy of Music in West Germany. Kimanen worked as lecturer from 1971 to 1974 at the Turku Music Institute and was principal cellist of the Finnish Radio Symphony Orchestra from 1974 to 1977. In 1970, Kimanen founded the Kuhmo Chamber Music Festival and became its Artistic Director. As a chamber musician, Kimanen played with the Jean Sibelius Quar tet. Kimanen received the “Finnish Composers’ AssociationMadetoja Award”.

DMITRI VINNIK played his first concer ts accompaning his mother, the well known Russian mezzo-soprano Emma Sarkissian. After his studies with Lev Petrov, Pavel Messner, and Naum Starkman, he graduated in 1993 from the Moscow Tchaikovsky Conservatory and later joined the masterclass of Eliso Virsaladze at the “Hochschule für Musik” in Munich. In 1992, he won the First Prize at the International Music Competition of Caltanissetta (Italy).
He played as a soloist with renowned international orchestras and as a chamber musician in Festivals as the Oleg Kagan Musikfest in Kreuth and Moscow. The intensive ar tistic friendship with the cellist Natalia Gutman and violinist Sviatoslav Moroz led him to the foundation of the “Gutman Trio”.